Moscow - To Thaw The Icy Reception

Influences of wars, wants, struggles and suffering are central to the history of Russia. After toppling the Tsars’ ruling, Stalin once remarked: 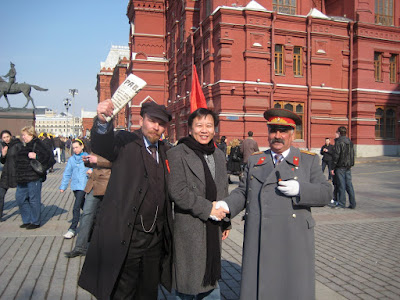 Can you believe? I took a photo with comrade Lenin (left) and Stalin (right) at Red Square.

Harsh in Weather and History
But not all Russia’s sufferings had came from outsiders as the Russian poet Yevgeny Yevtushenko (b. 1933) testified:
She was christened in childhood with a lash,
torn to pieces
Scorched.
Her soul was trampled by feet,
Inflicting blow upon blow,
Of Pechenegs,
Varanhian,
Tatars,
And our own people -
Much more terrible than Tatars

“And our own people – much more terrible than the Tatars”, this is not only true in Russia, but it also applies to many other countries, where their own political leaders are far more cruel than the invaders, killing more people.

Russia’s extremely cold weather and hardship in history explains to us why most of them are frosty, straight face, even those who are serving hospitality industry having not much smiles to offer their guests.

Moscow and Beijing: Cities look alike
I saw some resemblance in the city scenes of Moscow and Beijing, especially the old buildings and apartments that were built in the Communist ruling era. And, both cities adopt the same Ring Road concept. In Moscow, it is called Moscow Automobile Ring Road, or MKAD, more precisely МКАД in Moscow word, an acronym for Московская Кольцевая Автомобильная Дорога.

Moscow covers an area of about 386 square miles (878,7 square kilometers), its outer limit being roughly delineated by this Moscow Ring Road. Most of the areas beyond this highway have been designated as Forest-Park Zone, or greenbelt.

The map of Metro Station of Moscow 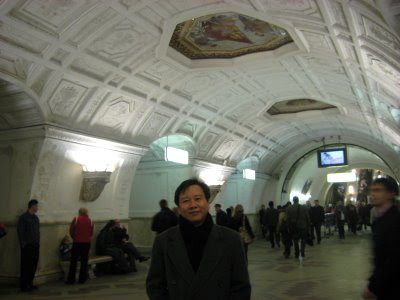 The Ring of metro is one of the tourist attractions

Spring in April is still cold in Moscow, the temperature can drop to - 4 Celsius at night and I witnessed a few snowfalls during my short stay.

When the Russia communism collapsed in the nineties, it gave way to freer market activities and allowed possession of private assets, the first wave opportunists with strong political connections, and the far-sighted entrepreneurs were the first who became either filthy rich or über-rich. Although the present economy is badly hit by the global slowdown, the roads of Moscow filled with luxury vehicles tell quite a different story.

In Search for The Right Partners
FingerTec 4-day exhibition ran quite smoothly with Batyr around. The market potential is huge, and we have yet to find steady partners, only have a few irregular customers from the past. Just like Brazil, unpredictable custom procedures and high duty imposed deters the ordinary companies from directly importing any merchandise into Russia. We have to look for the right partners to start a more robust business in the Russian territory.

We received quite some visitors from the Russian speaking CIS (Commonwealth of Independent States) countries. Our advantage, again, Russian language is readily available in our hardware and software, including in some of the marketing materials. Like what we always highlighted, “With FingerTec, we make everything easy.” 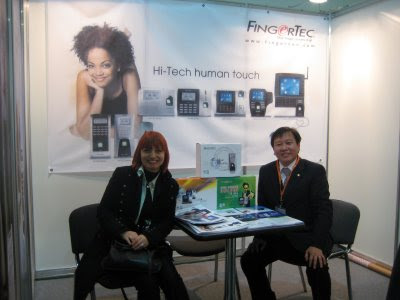 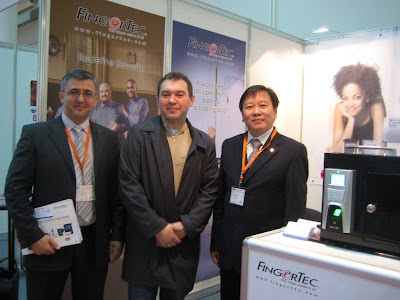 Thanks to Mr Kovalchuk Olekksandr, Axioma – Techno and Mr. Pastushenko Yuriy, Egida Ltd. from Ukraine; and Ms Karapetyan Roza, Elcomp Electronic Company from Armenia, who were unhesitant to purchase sample units on the spot. We hope our small steps would spark a bigger business collaboration in the future for the market of Russia and The Commonwealth of Independent States.

To thaw the icy reception, we put our best foot forward, presenting our Russian staff, Batyr Komurzoev, an avid economist who is pursuing his Phd in International Islamic University Malaysia at the frontline, for better communication and product’s localization process. I always believe in long-term business planning.

My counterpart, Kan San, CEO of Founder Japan likes to compare China companies with Japan’s over management style and product quality. One of his favorite theories is toilet sanitary. 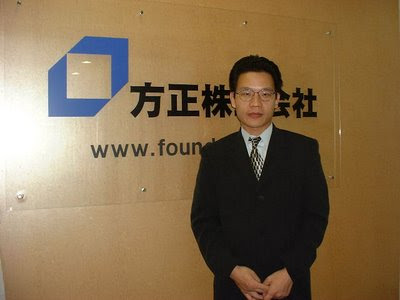 Once at his opening speech to address the Founder Group delegates during an overseas meeting held in Tokyo back in 1998, he said, “The cleanliness of a company’s toilet reflects the company’s management quality; and the cleanliness of public toilets tell the quality culture of a nation. ”

I couldn’t agree more. But when he kept appraising Japan to the bored audience in a dinner, I jokingly brushed him off by saying, “You didn't reveal the true reason of why Japanese public toilets are so clean, from my observation Japanese seldom use toilet to pee but they do it in the alley when they drunk.” Everyone burst into laughter.

Someone told me our former Prime Minister Mahathir Mohamed, who had started the Look East Policy (to learn from the eastern developed countries such as Japan & South Korea rather than the western to lessen the West influence) in the eighties, always had a private agenda to put toilet a must-visit ‘destination’ in his official functions, with the quality’s prying motive. ;-)

No matter how elegant an office building is, when you have to pinch your nose to enter the toilet, you have to think twice whether you still want to continue buying their products or services. The upkeep of toilet cleanliness reviews some trueness. Whether we call it toilet, washroom, restroom, WC, lavatory, latrine, john or loo, or whatever the term is, the sanitary of a toilet reflects the image of a company, and it is also a place where you can’t stick “Restricted Area” sign to disallow visitor to enter.

Recently, we have spent some money to upgrade our very own toilets, to further impress and to provide a more pleasant environment for staff and visitors when they carry out their daily “release” and “relieve” business. 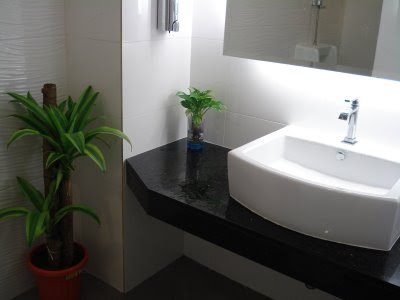 24-Month Product Warranty
In April, we made an announcement to give away 24 months product warranty to customers and 28 months to resellers. This move is not merely a sales strategy without the support of our product quality.

From our internal audit figure for 2008, the total cost for claimed part is just a friction of 0.3% to our total revenue. If we extended the limited warranty period to two years, it would still far lower than 1%. That’s the rationale why we happily extended the warranty period.

Moreover, we have successfully implemented the Salesforce.com CRM system to further monitor the inflow and outflow of every warranted part claimed to ensure the smoothness of the whole process. I can imagine a big smile for our customers!

In any ISO standard certification, the management guru likes to emphasize on Total Quality Management (TQM) approach. But for an outsider, where is the simplest checkpoint? Needless to say, it’s toilet. Therefore, I rephrase the TQM with the simpler Toilet Quality Management.

All in all, toilet quality tells it all. :-)